At the April 21, 2020 District of Peachland Regular Council meeting, Director of Operations, Shawn Grundy presented a referral received by the District for yet another mining exploration work within the Peachland Creek Community Watershed.  Read all the details and find out why this could be another “nail in the coffin” for our fresh water and a healthy sustainable water supply for Peachland. 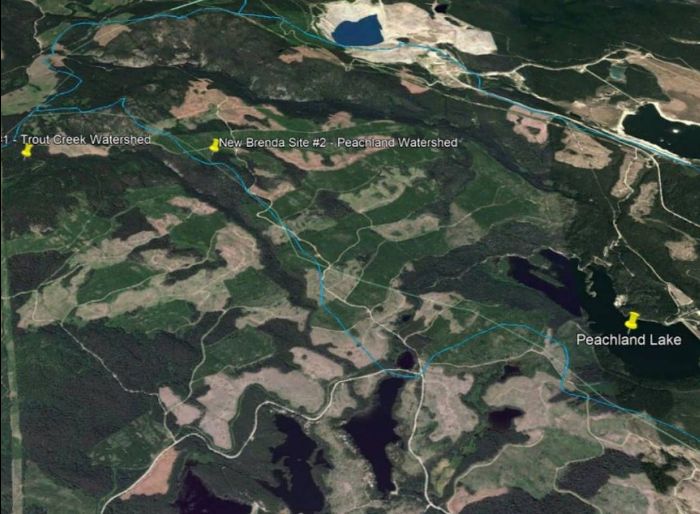 The new exploration conducted by Flow Metal Corporation is proposed only 3.5 kilometres from Peachland Lake, the source of Peachland’s drinking water, on the site of the former Brenda Mines. This mine closed in 1990, when the copper and molybdenum ores were depleted. Flow is seeking a 2 year permit to excavate the sites of interest and has “proposed a total 810 metres of trenching covering 1.3 square kilometres over two different sites where it wishes to perform induced polarization testing, which involves inserting metal rods into the ground to hunt for metals in the magnetic signature below.” (Penticton Herald: link below)
This is the fourth mine application to be contemplated in our watershed in the past few months. First, Troubadour Resources and its Amarillo project near Glen Lake started up, and then Bitterroot Mines proposed work in the Trepanier watershed. Troubadour subsequently proposed a second larger claim and now Flow Metal’s new application on the Brenda property located 20 km west of Peachland.

There are many impacts and threats to the watershed in general, and to Peachland’s water supply, seen specifically when Brenda Mines closed down. From road construction, heavy machinery, and the removal of “overburden” (the geologist’s term for forests), to the after-effects of the toxic materials left behind.

“The tailings pond retention dam of Brenda Mine was constructed to function only while the mine was operating.  A temporary closure of the mine in 1984 put the dam at risk of breaching and Brenda Mines received approval to dump 2.5 million cubic meters of tailings water into Peachland Creek and Lake Okanagan.  Protests by residents in Peachland in the subsequent years led to cancellation of further permits to dump tailings pond water directly into our watershed and Brenda Mines built a water treatment plant to treat tailings water before releasing it into Trepanier Creek.  This continues to this day.  The legal regulations for decommissioning mines was historically lax and it was not until the Mount Polley disaster in 2014 that legislation was changed to strengthen protections from tailings pond breaches.  However, the risk is not zero and it is not impossible that a breach could occur.”  Reference

Imagine four active mines in such a small geographical area. Active mining leaves huge scars on the land with the removal of the forest and soil, which contributes to increased erosion, loss of the natural water filtration system, increases in down-slope flooding and more wildfires.

But there seems to be a glimmer of progress against these types of operations in the watershed. To their credit, the Peachland District Council voted against the referral and ratified its strong opposition to this and other mining proposals. In addition, Council also passed a motion to include strict conditions on the operating permit of the proponent should the proposal proceed in any case.

The District of Summerland has also expressed concern and opposition to this and other mining referrals, and to all large industrial developments in community watersheds.

PWPA is encouraged by the opposition of local Councils and especially the District of Peachland’s strong position against these mining proposals.  PWPA sent a letter acknowledging its opposition and indicated PWPA’s support of their position. Read the complete letter here.

There are no upcoming events at this time.