PWPA submitted a letter to the editor of the Peachland View, discussing clear-cuts as a cause of the recent floods in the Okanagan Valley, and specifically in Peachland. (This letter was also published in the June issue of our newsletter and available on our website.)

We’re always excited to experience the wide readership of the View and welcome differing opinions.  One reader took issue with our use of the word “deforestation” in a response that appeared in the View on July 22.

Deforestation. It’s only a word. But like the old Bee Gee’s song,  “It’s only words, but words are all I have to take your heart away…” but words have power and have long been used to tap into our emotions. From poetry to propaganda, words can be used to make us feel good or bad; and influence how we think, pro or con.

Some would call it manipulation, others would say its just semantics, but most of us know this kind of “emotional control” by its more socially acceptable name: MARKETING. Whether it’s to convince you to buy more soap, a bigger car, or to elect a certain candidate, corporate marketing sells you a story first. It’s the words in the story that reach your emotions to get you to feel or think a certain way, whether or not the story is actually true.  Corporate marketing says “Whoever controls the language controls the narrative”.   W.C Fields said “If you can’t dazzle them with brilliance, baffle them with bullsh*t.”  Stephen Colbert called it “truthiness”.

The logging industry has been paying attention to these tactics. It is attempting to redefine public perception of logging by replacing specific words with euphemisms that do not represent reality. As we note in our response to the rebuttal, in logger-speak, cutting down trees became harvesting; logging became forestry; and re-planting is now reforestation. It all sounds so wholesome doesn’t it? George Orwell says this is the place where “words and meaning have parted company.”

The logging industry has built a modern day fairy-tale on its use of euphemistic language. We believe it’s time to change the narrative. As environmental activists, we must be vigilant not only of the actions of the industrial players in our watershed, we must use a critical ear to hear what they are really saying. If a message has the element of “truthiness”, it’s likely a laser-like narrative crafted to change our opinion, not to present reality.

PWPA’s response to the rebuttal was published in the August 14 edition of the View (as of this writing it is not yet available on the View’s site,) Read it here, PDF document: PWPA Response to Deforestation Rebuttal 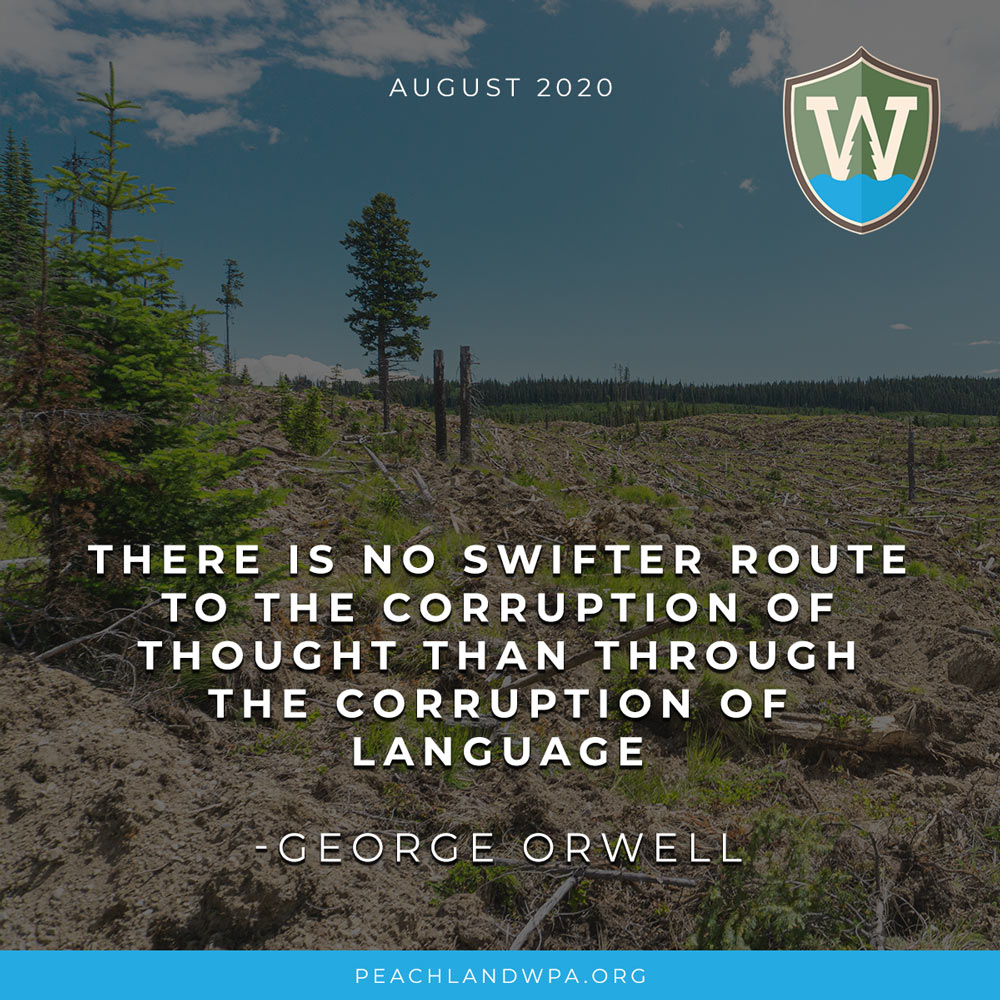 If you are interested in how corporate narratives and language work, here are some goods resources:

Under the Influence   Terry O’Reilly

The Echo Chamber of Corporate Science