Why is Okanagan Lake Flooding Again?

Why is Okanagan Lake flooding again and what we can do to prevent it?

We branded our town “Peachland-on-the-Lake”, now we might be more accurately known as “Peachland-in-the-Lake”.  If you live in the Okanagan, you have experienced three recent major flood events in just four years. If you live next to the lake selling your home or buying insurance can be challenging.   LiDar aerial photography recently revealed more of us now live in a floodplain. Although we are provided information on flood preparedness and post-flood restoration from our governments, there are few details on the causes of these floods. To explain it away by telling us it’s nature and we just have to “deal with it, it’s the new normal”, is disingenuous. So, why is Peachland flooding again and what can we do to prevent it? 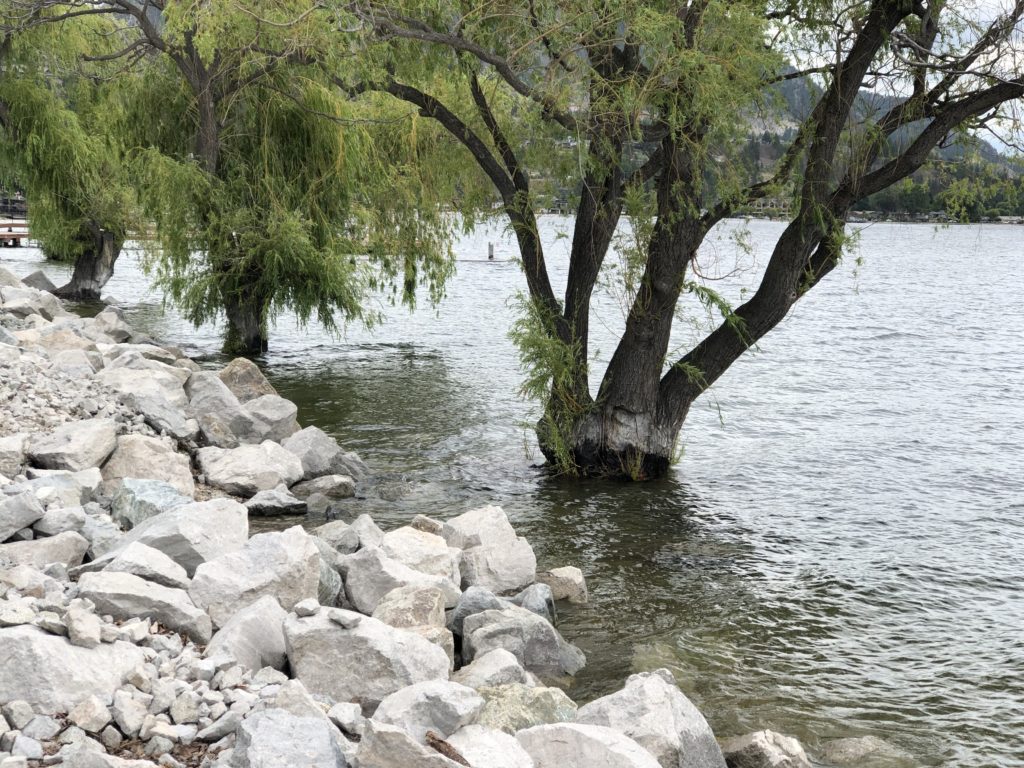 The Syilx people that first inhabited this valley knew how to live with floods. They built their camps and settlements away from the lake on higher ground. Unlike the indigenous inhabitants, European settlers chose to build towns on the flood plain and drained the wetlands that held back the water, to build schools, houses, and farms.

While it’s true that floods can be natural occurrences, recent independent research has shown that human activities play a significant and critical role in the kind of flooding we are experiencing now. Clear-cut logging, roads, wetland loss, and climate change are a few of the many human activities that amplify the effects of natural peak flows. Floods now are more severe, more frequent and of longer duration.

Let’s look at clear-cut logging. Seventy percent more snow can accumulate on clear-cuts and roads, than when it falls on a forest canopy. Snow can also melt up to 100% faster on bare land than in forests. Some experts estimate about 40% of Peachland watershed has been clear-cut. That means more snow accumulates than has accumulated in the past, melting faster than it has ever melted. Add wetter weather from climate change and we have flooding.

Whether from government, the logging industry, or academia, forestry experts agree: remove the trees, and land becomes more prone to floods and the probable droughts that follow. Doug Wahl, ministry investigator for the B.C. Forestry Practices Board, says “numerous Board investigations have looked at issues of forest practices and flooding and have found that forest harvesting, forest roads, wildfires and beetle killed forests are some of the factors that can impact the hydrology of watersheds and thereby the water quantity or timing of flow That’s why it’s so important to conduct watershed assessments to better understand the hydrology of the specific watershed of interest and the values at risk.”

Recent research also demonstrates that cutting down forest in snowy regions like the Okanagan can double – and potentially quadruple – the number of large floods that occur along the rivers and streams passing through those forests. Evidence points to clear-cutting as a key contributor to flooding, according to research published in Water Resources Research by University of British Columbia hydrologists Kim Green and Dr. Younes Alila. In forested areas, trees keep the melting under control by shielding snow from the sunlight. “As soon as you get rid of the trees, the snow melts faster,” said Green. “It’s that simple. When you analyze this new data you start to realize that deforestation has had a pretty dramatic effect on floods.”

After 40 years in the industry retired professional forester Anthony Britneff is well aware of the effects of logging on increasing snow levels. He wonders ”why municipal councils fail to ask ‘why the above-normal snowpack?’” Likely the reason is clear-cut logging and other disturbances above the snowmelt line. Unquestionably, poor forest practices, logging of large cutblocks, inadequate ditching and culverts, excessive road density and, particularly, cutblocks greater than 40 hectares in size above the snowmelt line all contribute to an increase in the magnitude, duration and frequency of peak flows. This is intuitive and obvious to most people; only governments, the forest industry and the professionals on whom they rely, appear to be in denial”

Britneff also wonders why, the forestry sector in BC does not use the current scientific modelling that has come to light in the past ten years, showing that clear-cuts not only lead to increased frequency of floods, but also their magnitude and duration. The logging industry needs to update their methodology to be in line with current scientific knowledge. Other branches of academia have adopted this more accurate modeling to predict hurricanes and climate change events, why is BC’s forestry industry stalling?

The climate change factors surrounding flooding are complex and hard to predict, local and provincial governments are slow to make changes to policies and regulations to mitigate the effects. If they are not willing to tackle climate change, are they willing to re-think our forestry practices?

What we do know is that an intact, healthy, and resilient forest can greatly reduce the risk of flooding. Still, our government continues to issue logging permits peppering this valley with more clear-cuts and roads, while the first scars logged in the 70s have yet to recover and emerge as an intact forest. Grand Forks is suffering the effects of the current logging system; with the consequence of extensive financial ruin, and heartache for its residents. As long as the government says logging companies in B.C. aren’t legally required to consider downstream flooding when they log trees in watersheds, nothing will change.

What can we do? One year ago Peachland Council asked Minister of Forests, Doug Donaldson, for a moratorium on clear-cut logging in our community watershed. To date, there has been no reply. Council also asked for data and research to be done on our watershed, similar to the current modeling for a cumulative effect study in the Grand Forks/Boundary areas. The findings of that work emphasize “increasingly large forest disturbance can have substantial impacts on average peak flows and large destructive floods.”

Is it time for a call to action for all local elected officials, municipalities, regional districts, and First Nations communities in this valley, to urge the Ministry of Forests, Lands, Natural Resource Operations and Rural Development to pause clear-cut logging in the 56 watersheds lining this basin until a clearer picture of the ongoing and cumulative risks surrounding flooding are known?   If government and industry believed it was safe to clear-cut a community watershed’s forest, they would have experimented on the slopes of Vancouver, Victoria, and Coquitlam years ago.