Now that the low clouds and lake fog have dissipated, Peachlanders may have seen plumes of smoke arising from the south side of Peachland Creek. Not only is this nothing to fear, it’s actually something to be happy about.

The burning we are seeing is the results of a traditional Indigenous thinning and fire mitigation project undertaken by Ntityix Resources LP, owned by Westbank First Nation.  Dave Gill, General Manager of Forestry for Ntiyix says “the selection/mitigation project is located about 3km up the Munro FSR adjacent to the 2016 wildfire. Crews are a couple weeks into the project now and about three-quarters done.”

“Ntityix fire crews have been removing the smallest trees and leaving the largest (Ponderosa Pine and Douglas-fir) resulting in an open mature forest, free of ladder fuels, and more characteristic of the forests in this area pre-contact,” says Dave.  This is nothing like the clear-cut methods of fire mitigation practiced in the Okanagan, and other regions, by many of the industrial logging companies, who prefer to remove all trees, including fire resistant deciduous trees like aspen, leaving open fields of clear-cuts.

Leaving the largest trees and some deciduous understory leaves a more natural ecosystem for the plants and animals that call this forest home. It keeps soils intact with the massive root systems of the large trees able to weave through the soil keeping the hillsides more stable and less prone to landslides. This type of forest treatment is less likely to cause massive wildfires when compared to the desiccated, tinder dry kindling and slash left by clear-cutting, which is highly flammable and causes unpredictable fires.

Dave Gill went on to say that “the Okanagan Nation Alliance and BC Wildfire Service have been planning a cultural low intensity under-burn in this area for the past few years but haven’t had the weather window to do it.” However perhaps this spring will bring the right conditions to extend these traditional and beneficial fire mitigation practices.

In the fall of 2020, PWPA members caught up with a team of summer students hired by WBN, who were using traditional methods of fire mitigation around Silver Lake.  It was such a quiet, peaceful activity, with smaller, calm campfire-like burning in several fires around the forest. The crews were working diligently and slowly, almost as if they didn’t want to disturb the forest- quite the contrast between watching a feller-buncher clear-cutting everything standing.

We are hoping representatives from Ntityix will be able to take PWPA members on a tour of the project to see the results, sometime this spring.

Thank you to Dave Gill for sharing information about the project and for sharing the winter photos of the activity last week. 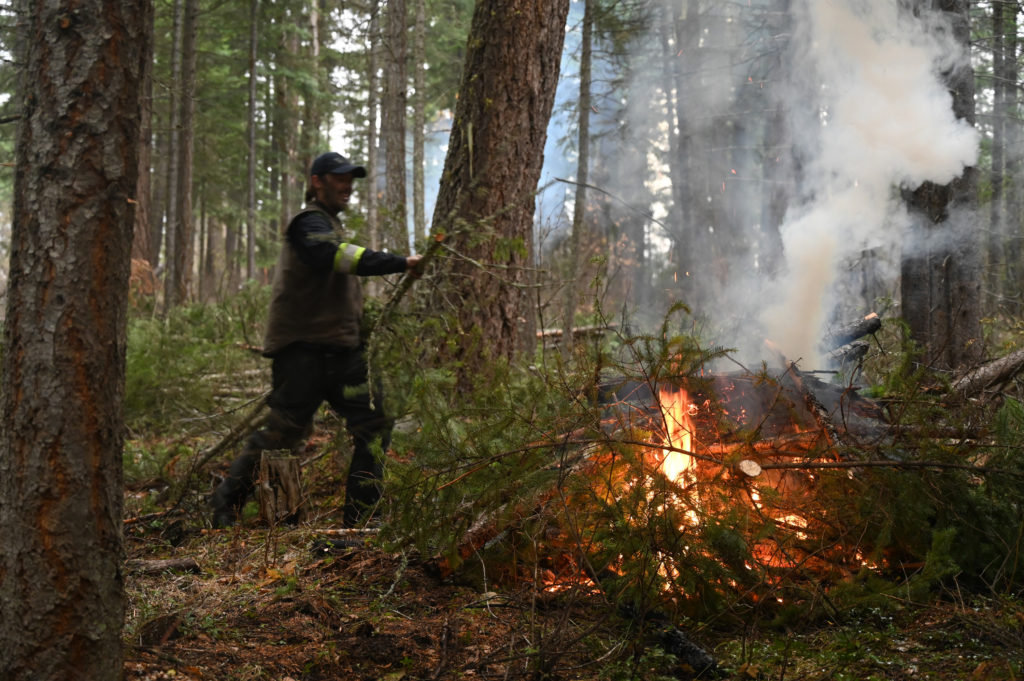