Down to the last Drop?

In May, a Watershed Watch team was up at Peachland Lake and noted the water levels seemed very low. Photos and drone footage seemed to confirm that there was little to no snow left to melt and  with Trepanier coming on-stream at the new water treatments plant and using Peachland Creek water, the question was raised whether or not the town has enough water? 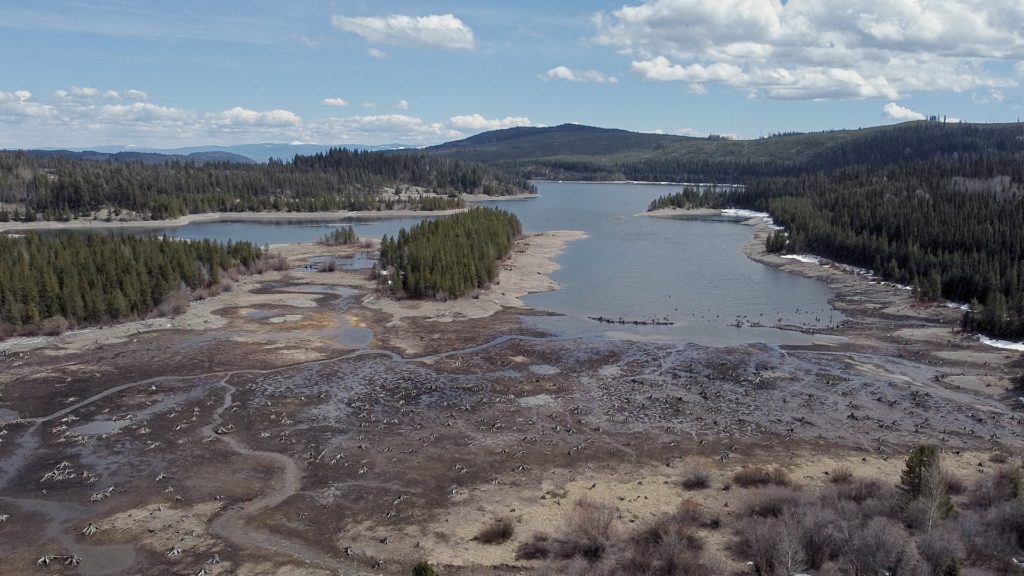 Not enough flow coming into the lake?

A quick inquiry was sent off to Council and the HWC to get some answers.  From what we know so far, no one can say for sure if Peachland has enough water today for all the future developments that are in progress and/or approved to begin.

In gathering information for the inquiry, we did a deep dive into Peachland’s administrative water management history. We found that past Water Master Plans and consultant reports

As well, we found a detailed and very professional letter to Council, from a concerned (and it would seen a very capable researcher and analyst) from September 12th, 2009 who was disturbed by the these inconsistencies, and on the actual assumptions on which the conclusions were based. We cannot confirm that a response was ever provided, or if this letter was simply received as information.

KEY FINDINGS: “The analyses conclude that expansion of water supply from streams, unlesssupported by storage, is not environmentally sustainable, nor does it permit population andeconomic growth to occur as planned. Failure to reduce rates of water use or seek alternativewater sources will either constrain economic growth or impair environmental resource values, orboth. “

2006  – District of Peachland Water Availability Analysis prepared by Dobson Engineering for the District of Peachland. The objective was to determine if the current water supply can meet increased demands from future development and to provide direction for future planning of waterworks infrastructure.  It quotes the findings from the report above, but reached different conclusions. It concluded that Peachland does have enough water.

The 2007 WMP projected the population for 2027 at approximately 12,000 people.
The updated forecast in 2014 for the year 2034, including the two major proposed
developments is approximately 19,000 people.
This revised growth forecast has implications on the major components
of the water system, including supply, treatment, storage and distribution. “

“Sufficient water is available within the Peachland Creek watershed to meet estimated future demands
provided that the MacDonald Creek diversion is restored
or flow from Brenda Mines WTP is diverted to Peachland Lake.
Diverting additional flow into Peachland Lake is required to ensure there
is adequate supply for domestic demands and environmental flows.”

In light of these contradictory reports, and with multiple new developments on-going since 2015, and 2 years of drought, and 3 years with floods, (climate change is here) and a very low level in Peachland lake this spring, PWPA wondered what what going on with our water supply since 2015 and decided to find out.

2022 – PWPA submits a letter to the Healthy Watershed Committee inquiring about security of our water supply, specifically the QUANTITY  of water, and was there enough to supply all the new developments on the books and in the pipeline since the 2015 Amendment to the Water Master Plan. (See the discussion doc here). And requested a copy of a report that describes the engineering works that must be undertaken to “funnel” more water into the town of Peachland.

”Can you supply me with a list of questions to which you would like answers, please and I’ll try to get answers by the meeting on 29th.
I have the report from Don Dobson, but it deals with more issues than just the available volume of water, and is subject to a confidentiality agreement, so I’m sorry, I can’t release it to you, but as I say, I’ll get you answers that pertain to your water supply concerns.
Regards,
Terry”
2022: District of Peachland staff recommend updating the 2015 Water Master Plan once more and to include the effects of climate change.
So do we or don’t we? Only the consultants know for sure!