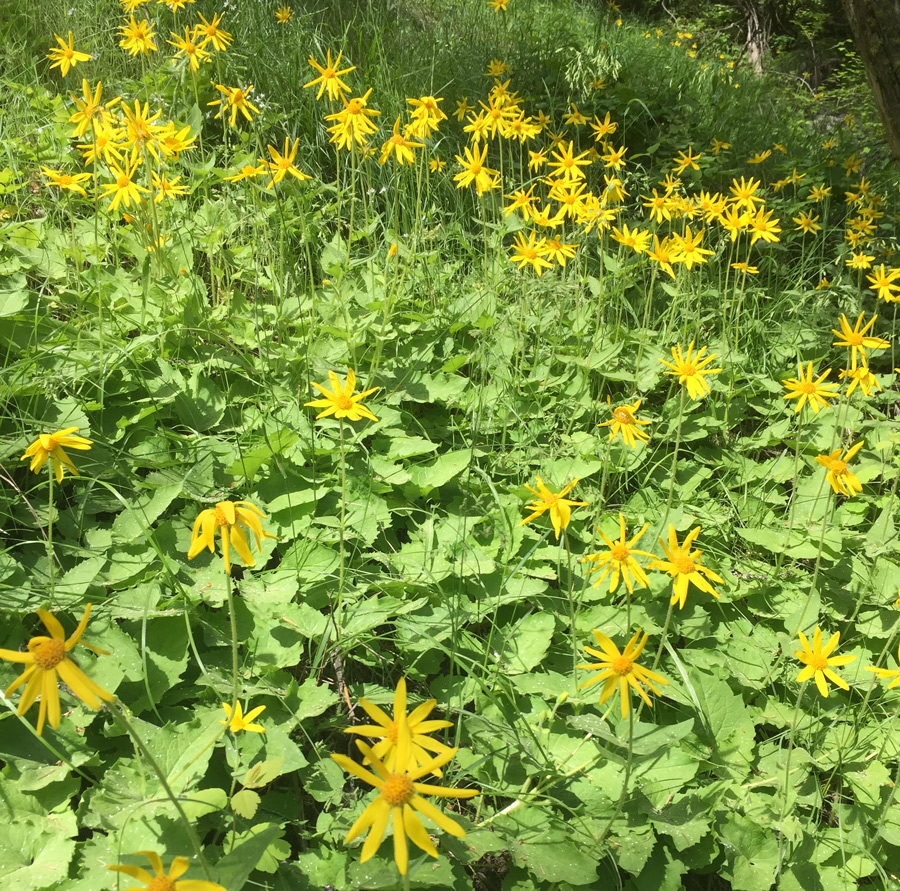 Arnica Montana is the most common name for this Sunflower family plant. It’s also known as Wolf’s Bane and Mountain Tobacco. Arnica is found in temperate climates of North America (Canada to Mexico) as well as Central Europe and even Siberia.

Here in the Okanagan, you can find Arnica in the hill sides in full sun to part shade from mid May until August, depending on the location. Peachland watershed has blooms from mid May through mid June and Big White ski area has Arnica blooming in mid summer.

The flowers are often mistaken for Balsam root, which grows in a “bouquet” bloom of many flowers on one plant. Arnica grows in a carpet of single flowers on their own plant and sometimes multiple flowers when in rich carbon soil like the areas that have had a previous forest fire.

The indigenous peoples used Arnica roots as a tea for back pain and as a way to stimulate blood flow and reduce pain, alleviate swelling and aid in tissue regeneration.

Today Arnica is prepared externally as it’s known to be toxic on open skin and can be detrimental to liver function and even fatal if taken internally in excess. As an oil, lotion or gel form, it’s benefits range from helping with swelling, inflammation, scars, bruises, arthritis, muscle strains and even age spots, hair growth, acne, psoriasis and eczema.

I prefer to aid on the side of caution and recommend not using on any type of broken skin or abrasions of any kind. Those with allergies to ragweed, chrysanthemums, daisies or marigolds can have a reaction. As well, anyone who is pregnant or breast feeding should avoid using Arnica. Some medical advisors indicate that it can have an effect on increasing the heart rate and blood pressure too.

As it acts like an analgesic, you should consult a medical professional if you’re using anti blood clotting medications & are wanting to try Arnica.

As far as the environmental standing of this species, it’s considered “least concern” in the conservation status. However, it doesn’t tolerate trampling, excessive foot traffic or over harvesting. When picking Arnica, you can “pop” off the open flower from the stem (leaving all greenery) and let the surrounding plants remain undisturbed. Avoid wearing down the greenery of the plants by picking along the sides of trails if possible.

If interested in a guided hikes to forage and make your own Arnica oil, or to learn more about Arnica please contact PWPA member Dawn Boys at bodyomyoga@shaw.ca or 250-878-6342.