Each Friday in September, I joined about 20 others including PWPA Director Taryn Skalbania, for cultural sensitivity sessions with Pamela and Grouse Barnes.  They are Westbank First Nation elders and knowledge-keepers, actively teaching and preserving Syilx knowledge, language, and culture.  Both are adjunct professors in the faculty of Health and Social development at the University of British Columbia’s School of Nursing, and also offer Syilx cultural teachings to the public, in partnership with the Kelowna Heritage Museum, the Kelowna Art Gallery, the Rotary Centre for the Arts and the Regional Parks.

As a language keeper, Grouse is fluent in Nsyilxcən, and has worked with the Okanagan College for over ten years as a cultural and language educator, also contributing as a school elder and mentor.  He is part of the Okanagan Nation Response Team, responding to critical incidents throughout the Indigenous communities in the Okanagan, and serves as a Spiritual Care Provider at Kelowna General Hospital.

Pamela is one of the founders of WFN’s Sensisyusten School and sits on the school board. She is also a member of the WFN Community Consultative Group which works with the local RCMP. Her academic background is in Aboriginal government, graduating from UVIC in 1993. She has served on many boards and committees in the Okanagan.

Pamela and Grouse are incredibly active in social issues, all the while being supports to their own family and nation.  It was a privilege to attend these sessions and see a glimpse of life through their eyes.  They were gracious and caring toward all of us who were lucky to get in to the course.  There was a big waiting list. They warned us that the content could be emotionally hard to hear, but that it was also hard for them to tell. It was.

I began to see life through their eyes, how their people had lived on the land for eons, moving seasonally, learning how to care for the land so the land could care for them, telling stories (their chaptique) to explain how things got to be this way, and what happened in the past.  Stories to guide one’s life.  How they planned seven generations into the future when making decisions.  There was so much wisdom.

WFN is one of eight nations comprising the Okanagan Nation Alliance.  Their website states, “We as the Syilx Okanagan people still affirm that the land is ours, as no treaty has been negotiated.”  And therein lies the conundrum.  Canada claims to follow the rule of law but doesn’t, it took the land from nations that had their own governing systems, and hasn’t yet negotiated ownership of the land.  All the local wealth resulting from “resource extraction” from the land is coming from land the ONA historically lived on.  This is how they see things.

When the Indian Act was imposed and reserves were established, the Syilx people eventually became dispossessed from the resources they had always relied upon, and their self-sufficient economy collapsed.  They could only hunt and fish in smaller areas, and the people were suffering.  In 1910, eight chiefs got together and sent a letter to the “Premier of the Dominion of Canada,” Sir Wilfred Laurier.  www.qwelminte.ca/1910-memorial-to-sir-wilfred-laurier  It describes waiting for justice, wishing for peace, pleading for answers. Nowadays WFN has achieved self government, and this is remarkable, but they still operate under the Indian Act which causes many barriers, and not enough has changed.

The brutal residential school system was a way to “get the Indian out of the Indian,” to force assimilation.  I see those days as an act of genocide.  The legacy of that attempt is children who were brutalized and witnessed acts of depravity, with resulting permanent psychological damage, who grew to be adults and parents in an uncaring society.  Canadians have compassion for war veterans with symptoms of PTSD, and give them support, but has expected that these children would emerge unscathed from being separated from their families and become functioning citizens.  The legacy is a litany of social ills.  People like Pamela and Grouse are working to ameliorate the situation, making inroads.

I learned about the 60s Scoop, Birth Alerts, government withholding records.  “The Indigenous people discovered Columbus, he was lost.”  The Chilcotin people challenged “terra nullis” (no one was in the land) and it can no longer be argued in court.  Lobster fishermen, Mt. Polley, Grassy Narrow, acts of defiance, Sisters in Spirit, Weddzin Kwa violations, all these things came up.  Did you know that an Indigenous person is not allowed to go into a reforested area and plant native shrubs to help the little seedlings survive?  Stories of coyote, told by Coralee in the pit house, and the delicious lunches arranged by Michelle topped off each day.

So what was the result?  Did it make a difference, being there, hearing these things?  I am changed.  I have a richer idea of their side of things.  I have shared only a tiny piece of all I have learned.  I am a settler, gratefully living on Syilix unceded traditional territory.  I like to learn their names for things.  Siya (Saskatoon), speedlum (bitterroot), and best of all n ̓x̌ax̌aitkʷ (Ogopogo), pronounced /n-ha-ha-it-kh/.  I am an ally.  Pamela and Grouse appreciate the work of the PWPA, and consider us allies in caring for the land.  It was a privilege to have been in the classes and hear first hand the messages that Pamela and Grouse had to share. 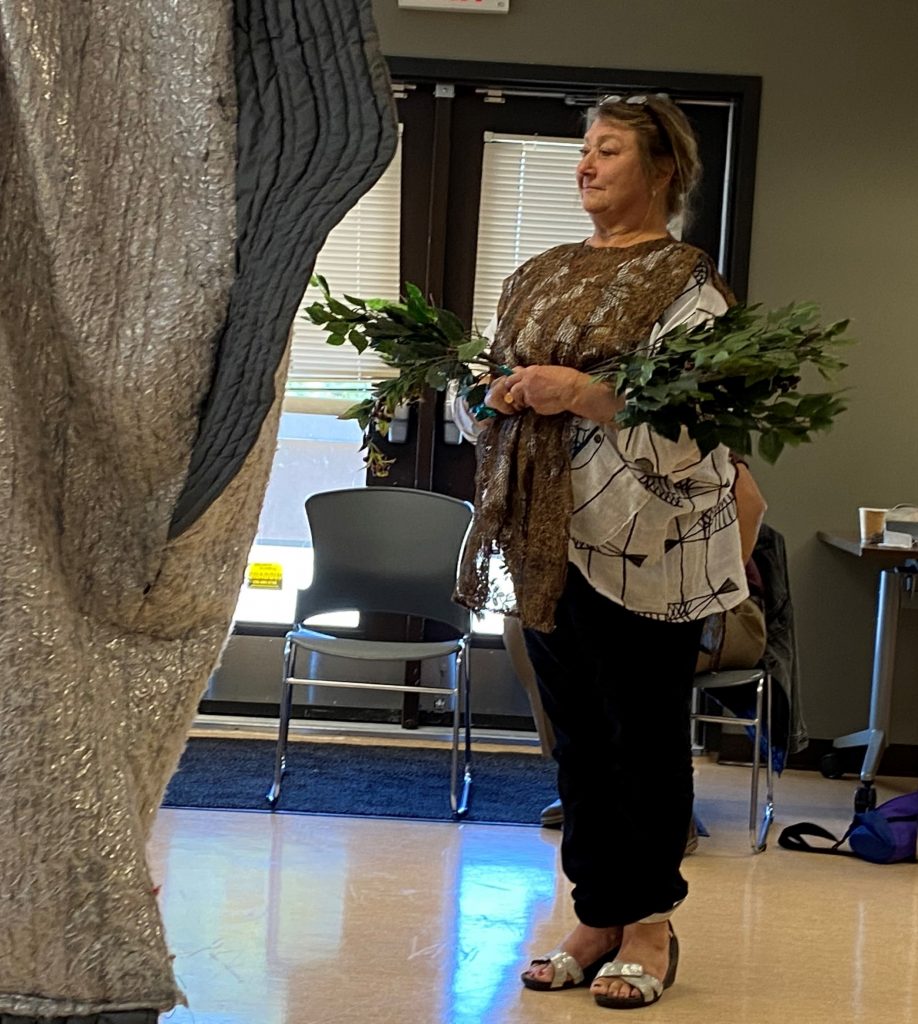